What Has Government Done to Our Money? Case for the 100 Percent Gold Dollar (LvMI) (English Edition) par Murray N. Rothbard 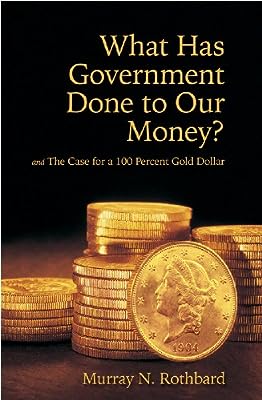 The Mises Institute is pleased to present this Kindle edition of Rothbard's most famous monetary essay — the one that has influenced two generations of economists, investors, and business professionals.

The Mises Institute has united this book with its natural complement: a detailed reform proposal for a 100 percent gold dollar. "The Case for a 100 Percent Gold Dollar" was written a decade before the last vestiges of the gold standard were abolished. Rothbard's unique plan for making the dollar sound again still holds up. Some people have said that Rothbard tells us what is wrong with money but not what to do about it. Well, with the addition of this essay, the problem and the answer are united in a comprehensive whole.

After presenting the basics of money and banking theory, Rothbard traces the decline of the dollar from the 18th century to the present and provides lucid critiques of central banking, New Deal monetary policy, Nixonian fiat money, and fixed exchange rates. He also provides a blueprint for a return to a 100 percent reserve gold standard.

The book made huge theoretical advances. Rothbard was the first to prove that the government, and only the government, can destroy money on a mass scale, and he showed exactly how they go about this dirty deed. But just as importantly, it is beautifully written. He tells a thrilling story because he loves the subject so much.

The passion that Murray Rothbard feels for the topic comes through in the prose and transfers to the reader. Readers become excited about the subject and tell others. Students tell professors. Some, like the great Ron Paul of Texas, have even run for political office after having read it.

Rothbard shows precisely how banks create money out of thin air and how the central bank, backed by government power, allows them to get away with it. He shows how exchange rates and interest rates would work in a true free market. When it comes to describing the end of the gold standard, he is not content to describe the big trends. He names names and ferrets out all the interest groups involved.

Since Rothbard's death, scholars have worked to assess his legacy, and many of them agree that this little book is one of his most important. Though it has sometimes been inauspiciously packaged and is surprisingly short, its argument took huge strides toward explaining that it is impossible to understand public affairs in our time without understanding money and its destruction.

Beyond El Dorado: Power and Gold in Anci...

The Power of Gold. The History of an Obs...

EVERY MAN'S GUIDE TO INVESTING FOR THE L...